Working in Quantum. Insights and behind-the-scenes with ParityQC’s Jay Barrington 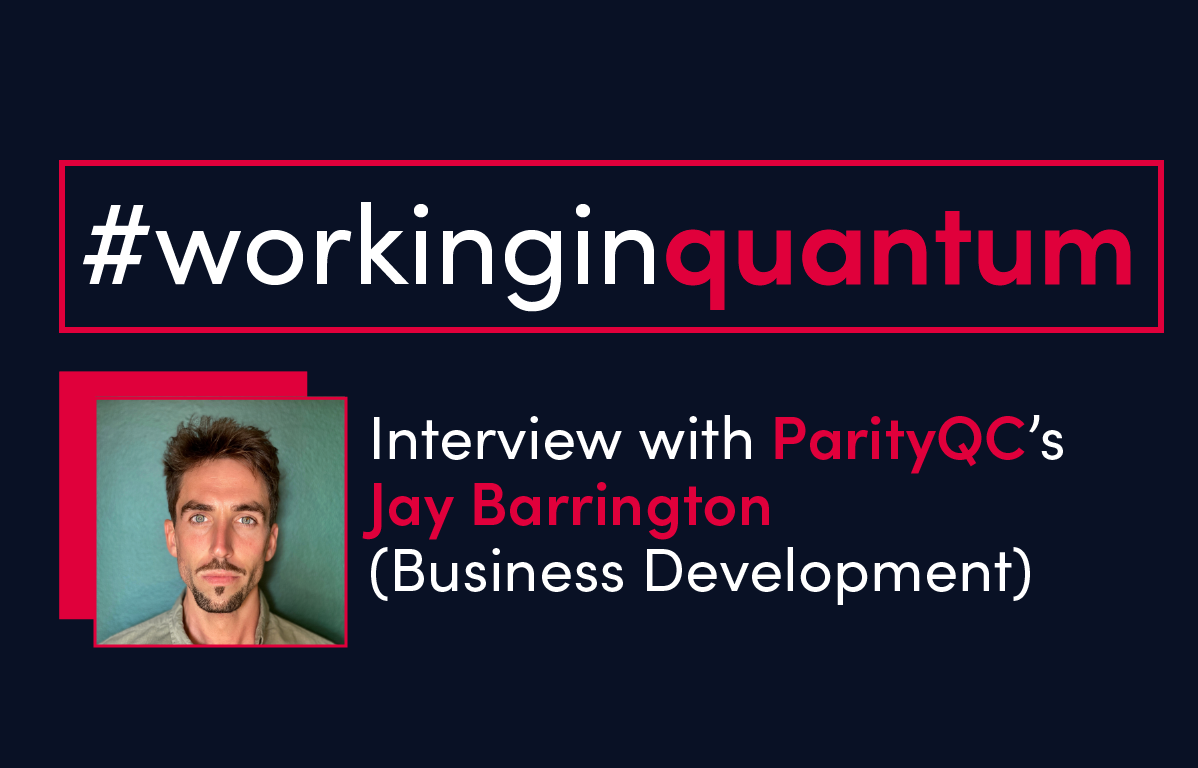 Our Working in Quantum interview series puts the spotlight on the people that are part of the flourishing quantum computing industry. Our second interview is with Jay Barrington, who is responsible for business development and is witnessing first-hand the incredible developments of the industry, both in Europe and worldwide. Expect a lot of behind-the-scenes, tips and insights!

What’s your role at ParityQC?

I am responsible for business development and commercial partnerships. In addition I work on several projects that contribute towards the company’s growth.

How did your career path lead you to working in quantum computing, and what skills and mindset have you developed previously that became useful in this role?

Having relocated to Innsbruck from London by way of the Philippines – its a long story! – I came across ParityQC whilst looking for business development opportunities. I saw that they were a deep-tech startup in the field of Quantum Computing which I thought was really exciting. In my previous roles I’d either directly worked in or looked after markets, sectors or industries that were emerging or about to ‘take-off’, so I felt comfortable getting into a market that wasn’t established. Regarding mindset, Sales tends to develop a lot of traits (beyond the obvious ones around selling and communication) so I would say being organised and analytical have helped. A lot of what we do as a company involves being able to switch between different projects quickly as well as and keeping on top of a number of different tasks; it requires a degree of flexibility and discipline to managing these various projects. My experience in the project management side of running B2B event series’ and most recently in coordinating a music festival on an island in the Philippines required a great deal of coordination and management given the number of moving pieces involved.

What did you know about quantum when you first joined and what preconceptions did you have about it?

I actually came across the subject matter years before by accident because I was reading a book about the Unconscious which led me to Schrödingers ‘What is Life’. From there I also picked up a copy of ‘In search of Schrödingers Cat’ at which point I became more informed. I was amazed by concepts such as the observer effect and the uncertainty principle. But what really stuck with me was this notion that quantum physics, the more I read, seemed to contradict everything I’d been taught. This idea that none of the laws of traditional physics made sense at a quantum level and that in fact there was a whole new set of laws and rules as we observed quantum phenomena was, and still is, pretty fascinating. This just made me feel a little more comfortable with the topic but overall I had a lot to learn regarding quantum computing in general.

What are you busy with right now?

Most of my time is split between various internal projects such as recruitment and onboarding as we expand into the German market, our involvement with various governmental initiatives across the DACh region, as well as maintaining and establishing commercial relationships with hardware providers for future collaboration.

What do you think of the current state of the quantum computing industry in Europe?

I think Europe is moving in the right direction. It’s encouraging to see a number of governments invest heavily into this sector and make quantum a matter of national strategic importance. We have some of the brightest minds and strongest academic institutions in the world all across the EU (and UK!) and there are a number of cooperations and consortia in place in which cross border cooperation is already successfully taking place – in short there is a lot of potential for the future.

The industry is growing fast and so are the number of companies and technologies involved in the so called “quantum race”, what have you observed in your research?

I think what stands out to me is the level of innovation and variation that exists in the market. Given the overall market is still in its infancy and there isn’t an outright winner in the race to be the go-to-hardware-provider of choice, new patents and types of technology that support the different hardware platforms are being made all the time. This leads to new spin-offs and start-ups, and it’s great for the overall health of the market.

We are also seeing variation in the number of companies that are being created considering the different types of quantum technologies that exist such as communication, sensoring and security etc. I think the future looks very positive and it will be really interesting to see how our current world looks once more of this innovation makes its way into the market.

Do you have any advice to someone looking to enter the quantum computing industry as an outsider? Is it tough, and how did you prepare for it?

There is a lot to take on, so having an open mind and being willing to learn is crucial, but in my opinion this is the case with any new industry you enter into. I read and watched videos that explained a number of core concepts and challenges of quantum computing, especially the different types of hardware technologies and their challenges around qubit control, error rates and decoherence. But I have to say the team here are also great, it helps to work with people who are not only smart, but friendly and helpful.

Many different things! I enjoy the people I work with, their backgrounds and experiences, also the fast-moving nature of being in a  company where nothing stands still and there is always a new challenge as part of the journey. I think our leadership has a great balance given both Wolfgang and Magdalena’s respective backgrounds and that’s really important when navigating a new market. But most of all I like the idea of being part of an industry in which there is still so much possibility for us to determine the outcome – it can go any way as nothing is set in stone yet.