Working in Quantum. Insights and behind-the-scenes with ParityQC’s Michael Fellner 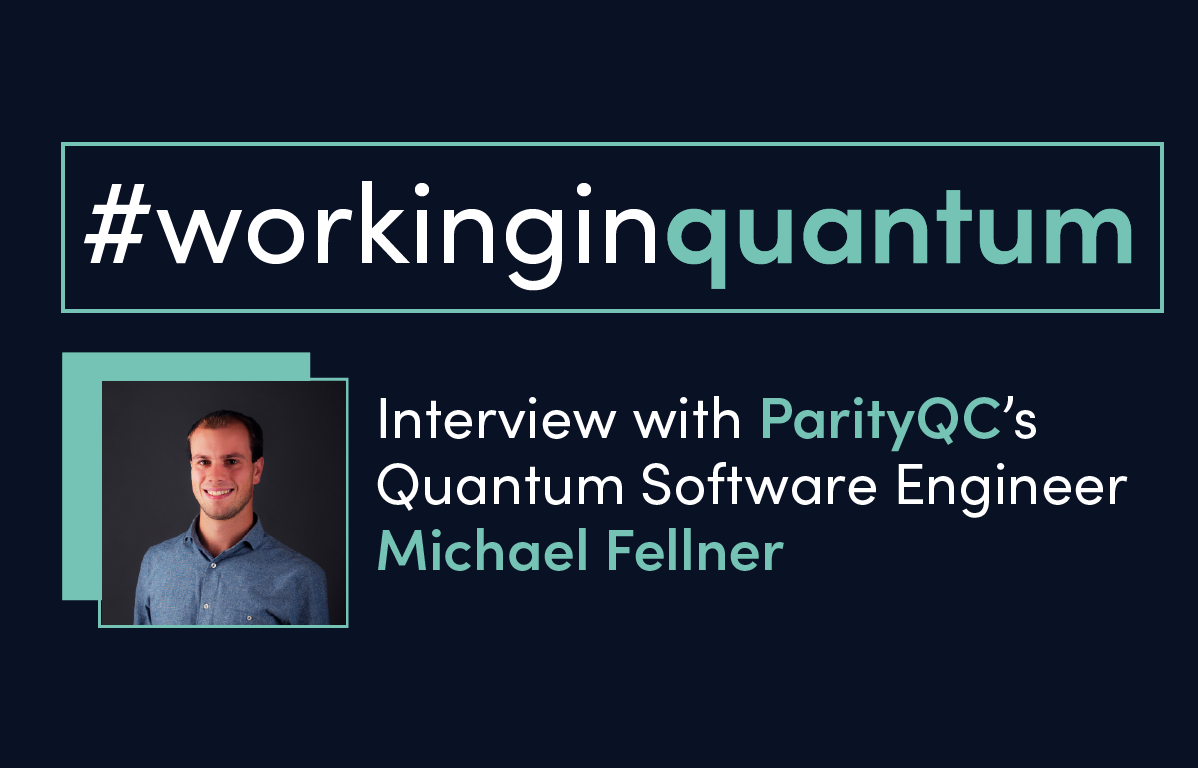 Our Working in Quantum interview series puts the spotlight on the people that are part of the flourishing quantum computing industry. Our third interview is with Michael Fellner, a quantum software engineer at ParityQC who is working at the intersection of academia and industry, researching on one side and working on how to apply groundbreaking discoveries to real-world scenarios on the other.

What’s your role at ParityQC?

I work at ParityQC as a Quantum Software Engineer. At the moment, my tasks involve mainly research related to the ParityQC architecture and digital quantum computing. In addition to that, I am responsible for benchmarking the performance of our architecture for real-world optimization problems compared to solving them with ‘standard’ quantum hardware.

Quantum physics has been a fascinating topic for me since my Bachelor’s studies, where I also got to know Wolfgang [Lechner], who encouraged me to do my Bachelor’s thesis with him. As I was interested in Wolfgang’s research in the field of quantum optimization, I took the offer. A year after I finished my Bachelor’s thesis on adiabatic quantum computation, I joined his research group to work with them for my Master’s Thesis, where I already met some of my colleagues at ParityQC. After my graduation, I started working at ParityQC – and here I am.

How is your experience being in the middle of both the academic and corporate sides of quantum computing?

It is actually very exciting to work a bit in-between these two sides. On the one hand, it is fascinating to do academic research and contribute to pushing the boundaries of quantum computing, while on the other hand it’s motivating to see our findings immediately being used by quantum hardware developers. The first is something you wouldn’t experience in a purely commercial career, while the latter can rarely be found when doing exclusively research in academia.

What are you busy with right now, and what is particularly challenging about it?

At the moment, we are compiling recent research results and making them ready for publication. The challenging part here is to formulate everything in a concise but also precise way, so that a reader that is not directly involved in our research can understand what we are doing. It also requires a good degree of collaboration with colleagues that are jointly involved in the research project. That is is fun, but also challenging, as some of us are still (at least partially) in home office.

Your team and Wolfgang have coined the term “parallelizability” to describe a unique characteristic of the ParityQC architecture. Can you give us more details?

On a quantum computer, the different qubits need to “talk” to each other, exchange information. But a crucial problem on state-of-the art quantum devices is that this interaction is difficult if qubits on a chip are too far apart. The usual approach is that whenever two qubits have to exchange information, they need to be brought near each other with so-called SWAP-gates, which usually renders a parallelization impossible. That is, most of the operations in a quantum circuit need to be executed sequentially, resulting in long runtimes. But in our approach, with the “Parity encoding”, qubits can be arranged in such a way that the qubits that need to talk to each other are neighbours on the chip. Therefore, no SWAP-gates are necessary and the circuit can be executed in parallel and therefore in constant run-time – independent of the system size!

What keeps you motivated in times in which what you’re doing seems impossible to solve?

I think anybody who has completed their studies in physics, mathematics or any related field has learnt to deal with setbacks and disappointments. Something that often helps in situations when I am tempted to give up is to look at things I have managed to accomplish although they seemed impossible at some point. Often, you just have to put things away for a while. It might happen that when looking at it again a few days later, you see the solution immediately and ask yourself why you couldn’t see it before. And, of course, talking to colleagues, explaining your problem to them is always a great source of motivation, regardless of whether they can in the end help solving your problem.

What are the tools of the trade, that someone looking to enter this sector should learn? Programmes as well as written resources that were helpful to you.

One of the most important tools we use for the development of our products as well as for for research is the programming language Python. There are quantum packages for Python, such as Cirq, Qiskit or Qutip that allow for simulations of quantum systems – which is the main part of my work. A great, more general reference I often use is the text book on quantum computation and information by M. Nielsen and I. Chuang.

During an event organized by Quantum Business Network [a European quantum computing association], you held a talk about some future financial applications of quantum computing. What was the highlight of that event?

We recently published a paper that shows that the ParityQC architecture can be efficiently used to predict a financial crash – a fundamental problem in finance – by formulating it as an optimization problem. The formulation of financial crashes as an optimization problem had already been done before in another paper, and one of the authors of that paper also attended the meeting, so that led to a really interesting discussion and exchange of ideas.

The quantum industry is quickly developing and the techniques we use are constantly changing. It is therefore important to keep track of ongoing research and to do self-initiated work. There is no one who can tell you exactly what to do in order to solve your problems – because literally nobody has done it before.

Your work involves a lot of trial and error, and big discoveries too. What’s the best “a-ha!” moment you’ve had since you joined the company?

In recent research, I had to compare the runtime of quantum algorithms in our architecture versus standard implementation – of course hoping that ours would perform better. I did simulations, made adaptions to our protocol and tried different variants to embed an algorithm in the Parity scheme, but I just found similar performance. At some point in which I obviously chose the correct strategy, the data curve suddenly dropped and I could prove that our architecture definitely has an advantage compared to state-of-the-art implementations for the given algorithm. That was definitely an “a-ha – wow!”-moment.

At ParityQC, we are developing new approaches to solve optimization problems on quantum devices, and I do think that our architecture has the potential to enhance the journey to the real-world application of quantum computers. Together with our great team, this challenge definitely makes everyday work interesting and motivating.

Do you have any final advice for someone just starting out in this sector?

The quantum industry is quickly developing and the techniques we use are constantly changing. It is therefore important to keep track of ongoing research and to do self-initiated work. There is no one who can tell you exactly what to do in order to solve your problems – because literally nobody has done it before. This is exciting and challenging at the same time, and something you have to expect when starting out in such a young field as quantum computing.