Working in Quantum. Insights and behind-the-scenes with ParityQC’s Sagar Kale 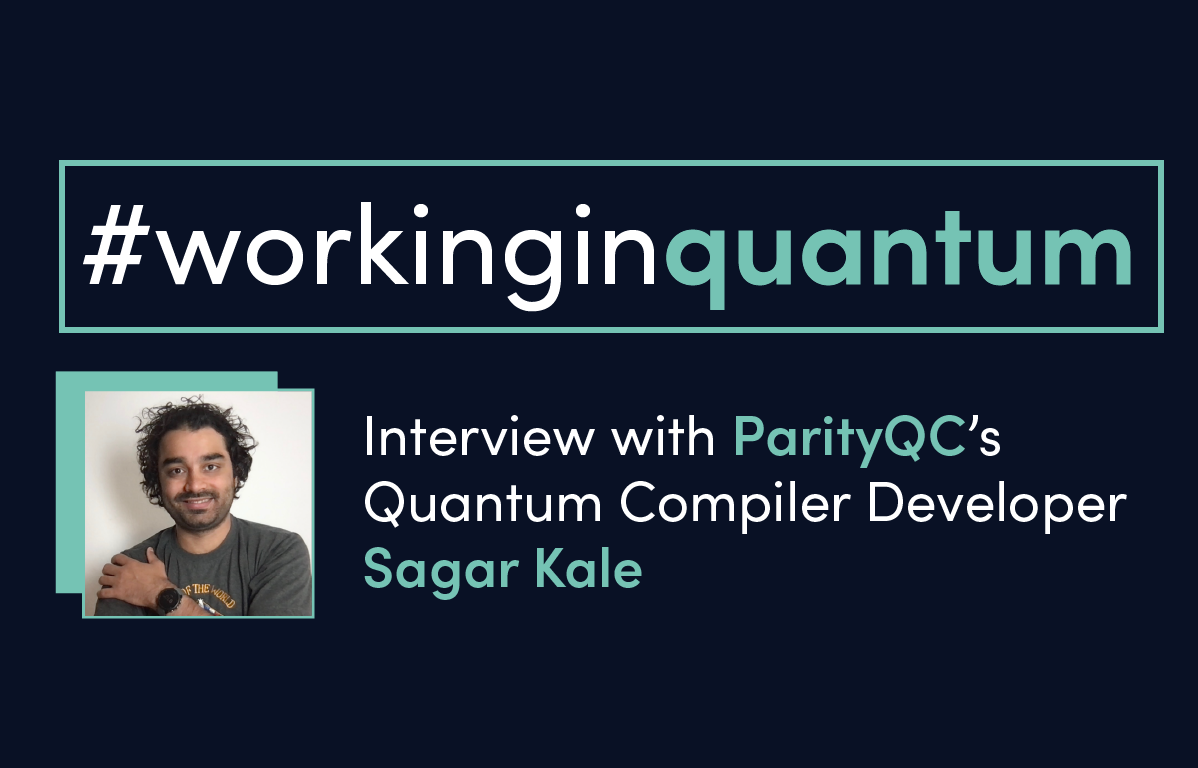 Our Working in Quantum interview series puts the spotlight on the people that are part of the flourishing quantum computing industry. This new interview is with Sagar Kale, Quantum Compiler Developer at ParityQC. Sagar is originally from India and has an impressive academic background in theoretical computer science. He became fascinated by quantum computing during his post-doc, and today he’s breaking boundaries working on ParityQC’s compiler.

What do you do at ParityQC?

I am part of ParityQC’s compiler development team. The compiler I’m working on is responsible for computing a quantum chip layout for an optimization problem. As one can guess, it’s very different from a classical compiler.

You have a background that is unique in our company – theoretical computer science. Can you tell us about your academic path, from the moment you decided to study computer science to what motivated you to continue your education to post-doc level?

At the risk of sounding cliché, I’ll say that I was fascinated by computers (and programming) as soon as I first saw one when I was in school. In my smallish town in India, it took until mid-late 90s for computers to start arriving. But I somehow ended up joining a mechanical engineering bachelor’s program.

I decided to pursue a master’s in computer science while I was working in IT as a software engineer—in a job that was supremely mundane. Coming from a mechanical engineering background, I had to master quickly (within a year) most of the important courses taught in a computer science (CS) curriculum to be able to crack the national entrance examination for master of engineering programs in India called GATE (graduate aptitude test in engineering). It was one of the hardest but also most rewarding experience in my life, as I managed to secure a seat in India’s best institute, IIT Bombay in Mumbai.

During the studies for GATE, a theoretical computer science (TCS) subject piqued my curiosity.  And during my master’s, I took mostly TCS courses; my interest kept growing. It was really fascinating for me to discover – with the help of amazing algorithms professors at IIT Bombay (Prof. Sundar Vishwanathan, Prof. Diwan, and Prof. Ranade) – that one can really, mathematically prove that algorithms with certain properties exist while those with certain others do not. Later, I joined a PhD at Dartmouth College in the US, then a two year postdoc in EPFL, Lausanne, Switzerland, and then another postdoc of about three years in Vienna, Austria. I continued doing good research and really enjoyed teaching, but in the end, I realized that research-academia is not for me.

What’s the most rewarding experience you had while in the academic world?

Academia can be a dark place. There are months, even years, when you seemingly don’t make any progress. And therefore, the few occasions when you get a result—when you get an interesting research insight, when your paper is accepted—are precious. I cannot pick one experience that was the most rewarding, rather, at the moment I got my first postdoc offer and it became clear that I will soon be defending my PhD, I realized that maybe this was the reward for all the hard work I put in.

What fascinated you about quantum computing, which led you to take the leap into quantum?

What skills and tools of the trade are most useful for someone who, like you, might be switching from the academic to the corporate world?

I’ll answer with respect to computer-science-academia to quantum-industry transition. Obviously, the most important skills are abstract problem solving skills and coding skills.  A knowledge of quantum computing, I believe, is good to have but not necessary. One can study prerequisite quantum computing in a couple of months at most.

What are you busy with right now and what is particularly challenging about it?

We recently implemented a compilation algorithm that generates a solution in the form of a quantum chip layout step-by-step. For the first prototype, the step we took was – in an abstract sense – a bit coarse, because it was easier to implement. Now that we got it working, we will be taking finer steps, and that involves some case analysis. It also involves understanding this particular algorithm better, and for that we are using different implementation techniques. So, as you see, there is a healthy mix of analysis and implementation. There are several ideas we have for improving this algorithm even further, and I cannot wait to see how they turn out.

How do you train yourself to think outside the box, something necessary in such a novel industry?

I don’t train specifically towards thinking outside the box, but, in general, solving challenging problems, e.g., coding puzzles, chess, is helpful to stay sharp.

How is life in Austria? Did you pick up any new pastime activities since you’re here?

I live in Vienna, which is a great city! Since I moved to Austria, I started playing chess. That was actually because I watched “The Queen’s Gambit.”

Working at ParityQC is just awesome! The ambience is a mix of academia and industry, really, best of both worlds. You want to do something new, and you know that it will not just end up as a paper with a small audience but an actual product. The problems to solve are equally challenging and fun but with real impact. Also, my colleagues are really smart and knowledgeable, so every discussion is a great learning experience. This quelled my doubts about professional growth in an industry job.